Market Update and the Return of Volatility

In my post back in January of 2017 (which you can find here) I noted that diversification had appeared “sleepy” and that then recently underperforming developed international stocks and emerging markets were more attractively valued. Though this pattern had been persistent for several years, 2017 was a year where international stocks (developed and emerging) both outperformed domestic stocks in a relatively calm environment. When the year ended, the largest peak to trough decline for the S&P 500 Index was just under 3% (St. Louis Federal Reserve data on the S&P 500).

Since the beginning of February, however, volatility has returned. It’s a reminder that periods of relative tranquility don’t last forever.

Volatility is something the long-term investor should look past, though I recognize it can create uneasiness among some investors.

If we were facing serious economic problems, it would be a cause for concern. Right now, I don’t believe we are.

Thanks in part to the tax cut, corporate profits are forecast to rise nearly 20% this year (Thomson Reuters).

Weekly first-time claims for unemployment insurance recently touched a level not seen since the late 1960s (St. Louis Federal Reserve). It’s a concrete sign that companies don’t want to lose employees. If business conditions were deteriorating, the opposite would be true.

The Conference Board’s Leading Economic Index (designed to detect emerging trends in the economy), continues to healthily trend above recessionary levels (see chart below). While we are facing some challenges (we always will), the economic fundamentals appear to remain solid. 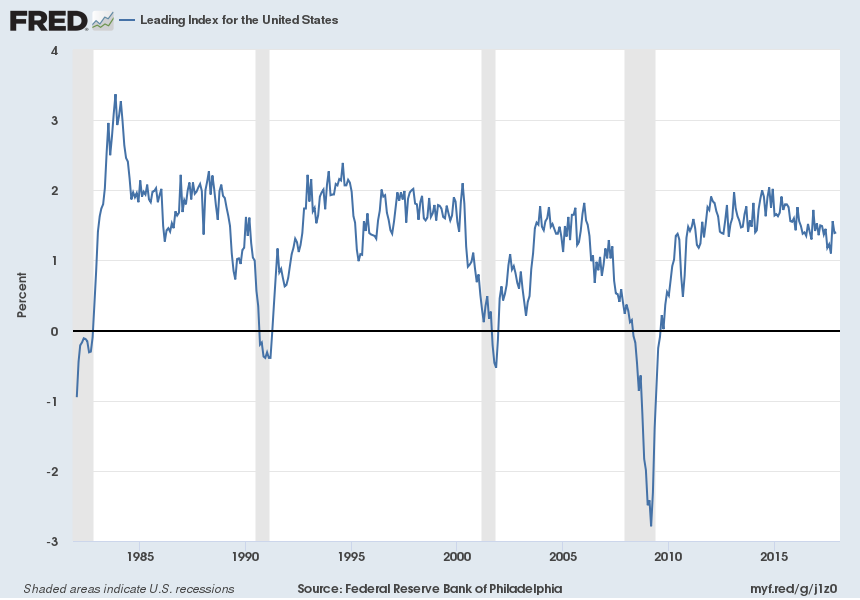 At the moment however, investors appear concerned with near term risks.

Two issues have surfaced that have stirred up volatility.

Last month President Trump announced he will impose steep tariffs on steel and aluminum imports, fueling concerns over protectionism and the potential impact on the economy.

Investors viewed the corporate tax cut and the paring back of regulations favorably. Trade tensions, however, have created uncertainty.

Most economists support free trade. It’s a net benefit to the U.S. and global economy. But “net benefit” means there are both winners and losers.

Losers–those whose jobs disappear amid a flood of cheaper imports. Winners–consumers who pay less for various goods, and those who work in export-oriented industries. In 2017, U.S. exports totaled $2.3 trillion (U.S. Bureau of Economic Analysis). Yes, that’s trillion with a “T.”

U.S. manufacturers are consumers of steel and aluminum, including farm and construction equipment, aerospace, and pipelines and drilling equipment in the energy industry.

At the margin, tariffs may modestly boost inflation and could force some U.S. manufacturers to put projects back on the shelf or move production offshore.

Additionally, U.S. tariffs may invite retaliation, pressuring exporters, jobs and profits in globally competitive sectors. It could also spark a tit-for-tat trade war that hurts everyone.

As the month came to a close, Trump announced he is set to raise tariffs on Chinese imports. In return, China announced new barriers to some U.S. goods, though the response was measured.

While the odds of a major trade war remain low, all this has injected uncertainty into market sentiment.

I provided an explanation for the recent volatility because I believe one is in order. Investors should however, focus on the long-term.

So let’s step back and gather some perspective by reviewing the data.

According to J.P. Morgan Asset Management — 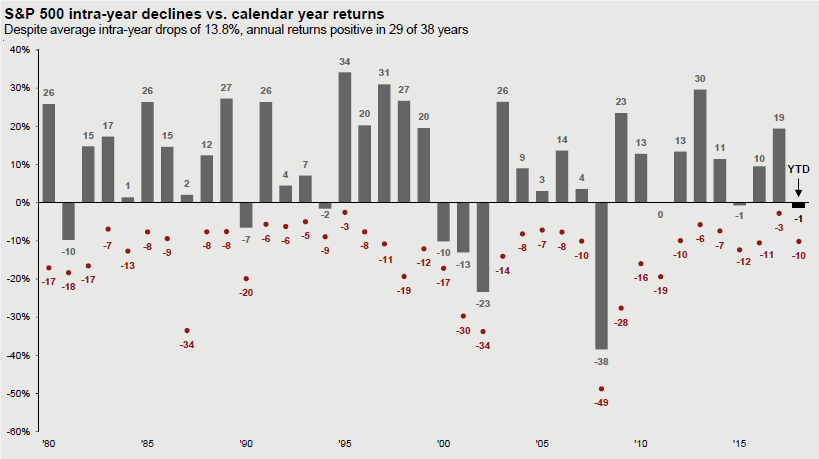 Turbulence surfaces from time to time. Patient investors who don’t react emotionally have historically been rewarded.

Long term returns are best predicted based on the price at which you purchase a security. When one buys a stock, they’re really purchasing a stream of future earnings. The chart below outlines how, relative to history, the price of U.S. stocks is high given the earnings of those stocks. 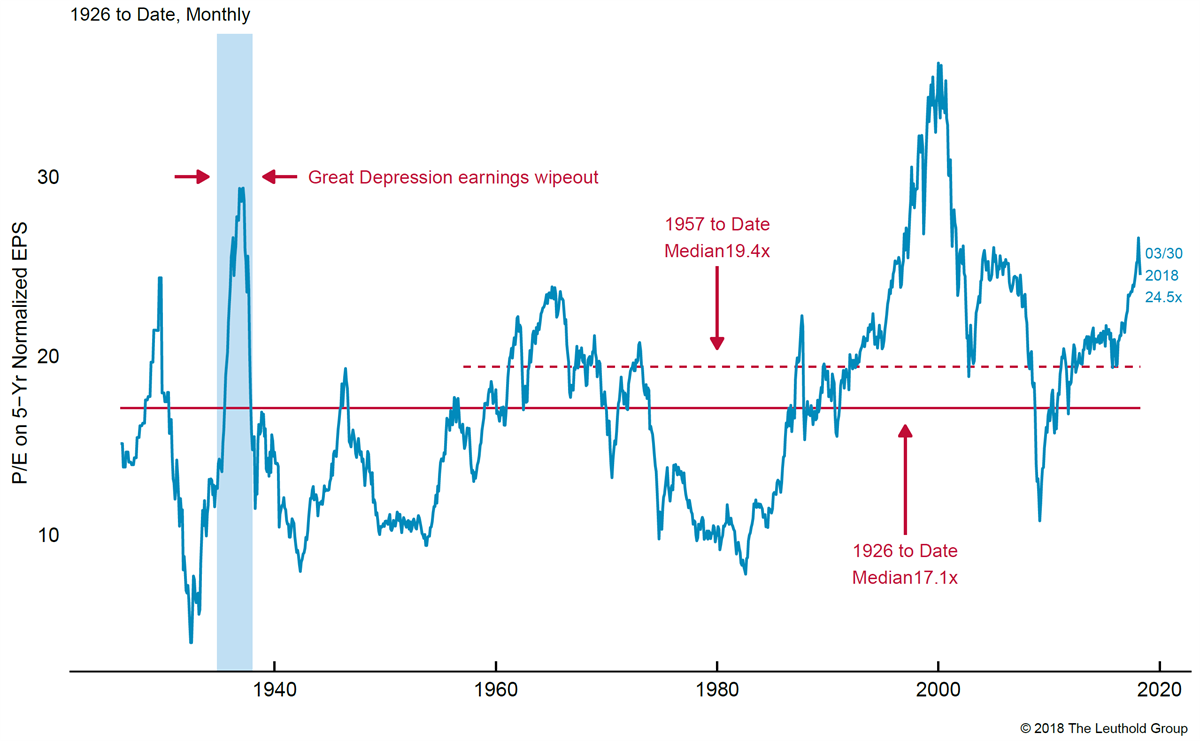 While developed international stocks are expensive relative to history, they are cheaper than U.S. stocks, and perhaps more importantly, their value is 20% below the average of the past eight bull market peaks. This indicates there may be more room for them to run.

While opportunities remain in the stock market, there are some interesting things happening in the bond market. The 10-year treasury yield touched 3% today (April 24th 2018) for the first time since 2014.

Why is this important? Auto loans, home mortgages, and other loans are tied to the benchmark 10-year yield. Investors fear that higher interest rates could start to eat into corporate profits and also signal that more inflation is coming. (CNN)

The old adage regarding bull markets is that they rarely die of old age, the fed finishes them off. The current threat isn’t that rates are rising (this is reflective of a healthy economy and rates are rising globally because of this), the threat is the pace at which rates continue to rise. This is hard to predict, but worth watching.

In summary, volatility is back, but we shouldn’t emotionally react even though it can be uncomfortable. Equity valuations are generally high and we should reduce our expectations for future returns, yet opportunities remain. There is no visible recession threat, and further there is stimulus in the form of tax cuts and impending infrastructure spending which should buoy the economy. Although rising interest rates point to a healthier economy, the pace at which rates continue to rise could be an important gauge in determining the longevity of the current bull market.

Taking some degree of risk is inevitable if investors want to grow their assets over time. Through discussions with clients and measured analysis, we attempt to quantify how much risk our clients need to take to reach their goals. These conversations and data are then translated into practical, diversified portfolios.

We take into considerations stock valuations, tolerance for risk, time horizon, and inflation and interest rates among other factors in our portfolio construction process. We’re in a time where taking an appropriate amount of risk is crucial. Diversification is likely to prove more beneficial than in years past, and act as a welcomed buffer to the choppy waters ahead.

The views expressed are those of the author and not necessarily those of Lincoln Financial Advisors Corp.

Diversification cannot eliminate the risk of investment losses. Forward looking statements may be subject to certain risks and uncertainties.  Actual results, performance, or achievements may differ materially from those expressed or implied.