The Year In Review and What Might Be Ahead

2016 has come and gone. It started out in a very rocky fashion, with comparisons to 2008 that were too numerous to count.

Let’s be clear. As emphasized in the past, markets don’t always trade in a quiet and orderly fashion. But, just because we run into turbulence doesn’t mean it’s time to retreat into cash. Volatility has been and always will be part of the investment landscape. It’s how we manage and mitigate risk that is critical.

2017 really consisted of two sets of market undercurrents. Leading up to the election, the market was positions for a continuation of the status quo: lower interest rates for longer and low inflation. Defensive dividend paying stocks (such as utilities and consumer staples) and bonds of longer maturity fared well. Following the election, however, the market quickly reversed paths under a new assumption that we'd experience a faster pace of interest rate hikes and higher inflation expectations. Defensive dividend stocks sold off, as did bonds, while financials, industrials, materials and energy rallied. (Chart credit CNBC, through 12/09/2016) 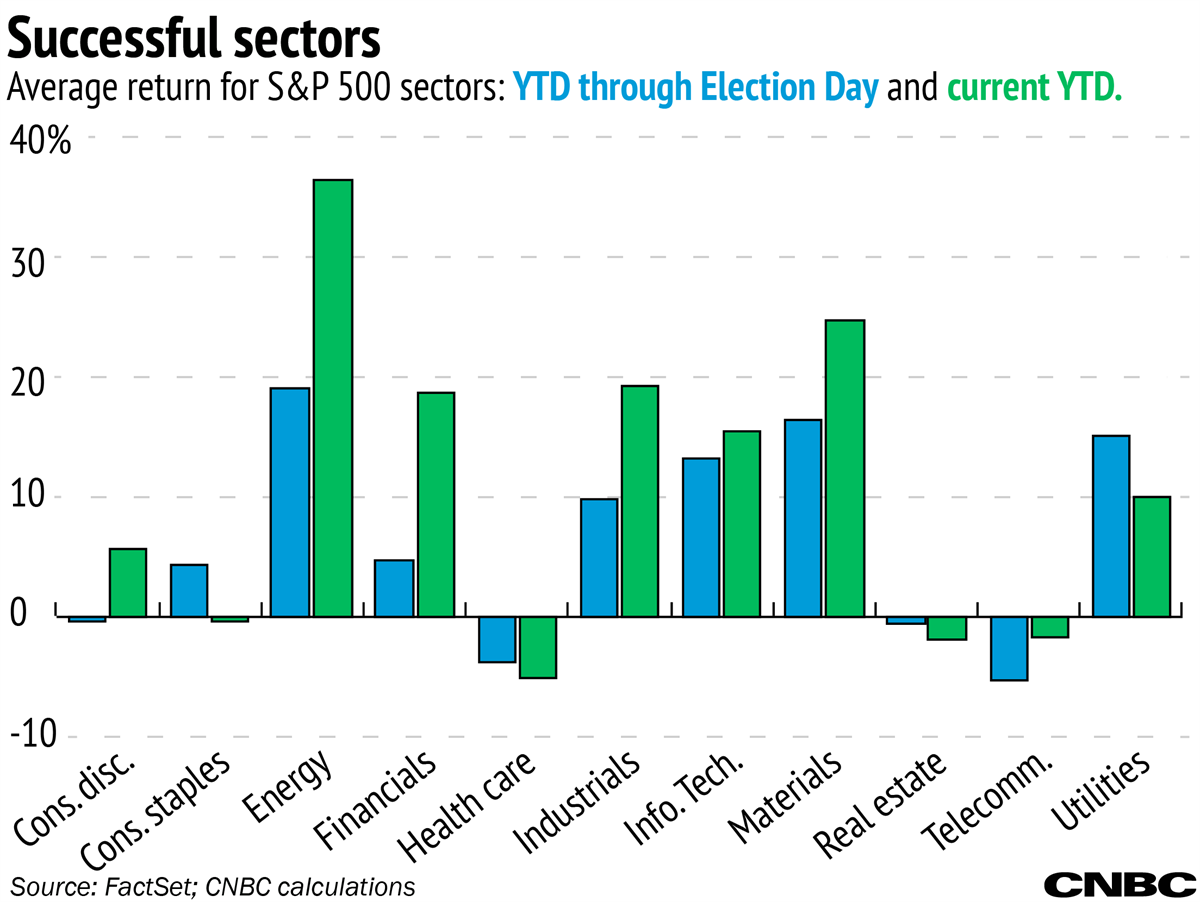 The change in expectations for interest rates and inflation is a result of an administration targeting deregulation, increased spending on infrastructure and reducing income and corporate taxes. In short, this is stimulus. This stimulus (absent a neutral spending plan) will increase our budget deficits, lead to higher interest rates and likely increase the price of goods. Within weeks of the election, interest rates had increased substantially, driving losses on core bond holdings. (Chart credit City National Rochdale) 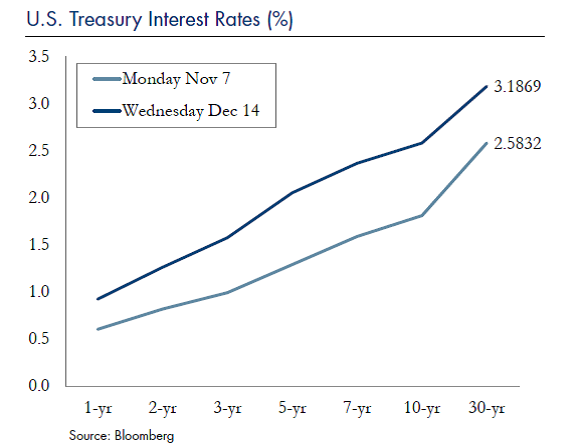 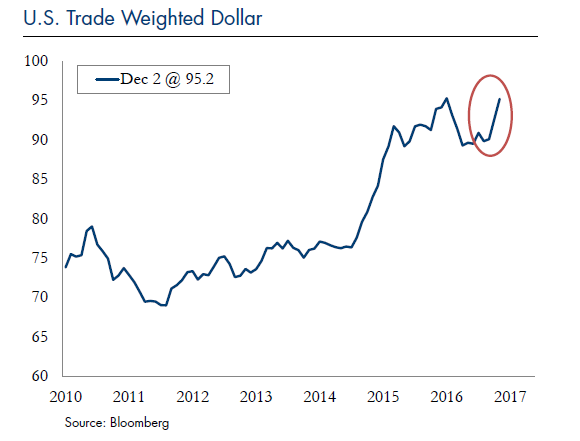 Did diversification die? We don't think so, but maybe it's been a bit sleepy. U.S. equities have continued to perform well however, future returns versus other asset classes are looking less rosy. U.S. equity valuations relative to those of foreign equities are at some of the most expensive they've been in recent history. (Chart credit Leuthold Weeden)

Emerging markets, albeit with some significant volatility, have some of the most attractive valuations. This means, over the long term (10+ years) they have a high likelihood of being a top performer. (Chart credit Leuthold Weeden)

The year is starting in an upbeat fashion. The economy is moving ahead at a modest pace, interest rates remain historically low, and odds of a recession are low.

Moreover, Thomson Reuters forecasts S&P 500 profit growth of 12.5% this year, and consumer and small business confidence is up sharply in wake of the election (Conference Board, National Federation of Independent Business).

For starters, the forecast for corporate profits is predicated, among other things, on continued economic growth.

The late-year optimism that pushed the major indexes to new highs was aided by optimism that tax reform, regulatory relief, and infrastructure spending are on their way.

But what shape will tax reform and new spending take? Compromises will be needed and major new spending, if it passes the Republican Congress, could have huge lead times.

One thing that has been certain–Donald Trump has toned down his anti-free-trade rhetoric, alleviating some worries among investors.

Of course, all of his tough talk on trade may just be bluster, as he hopes to strike tough new trade deals.

Problems abroad that have not had a material impact on the U.S. economy have created temporary angst, slowing but not ending the current bull market. The evidence reveals that over the past 50 years, bear markets have been primarily associated with recessions (St. Louis Federal Reserve, NBER data).

Portfolios may need to weather a storm they haven't experienced in while, one with increasing interest rates and inflation. Positioning portfolios for this dual threat will require being defensive in regards to bond duration and including an allocation to assets that have historically provided a good hedge against inflation.

As far as whether the market has gotten ahead of itself, the answer may lie in what is actually accomplished in the first 100 days of the new administration.