Portfolio Customization, GDP and the Dollar

Why we buy what we buy

Last month, I talked about stocks and how the collective wisdom of the market values, or prices, companies.

Continuing on with that theme, it’s important to understand why I may recommend individual stocks or bonds, stock or bond mutual funds or any investment for one person, and why that same security may not be appropriate for another.

In some ways, it’s fair to ask, “Why is an individual stock portfolio a good fit for John but not for Jane?”

I’ve often compared a carefully crafted investment plan to a financial roadmap. When you embark on a vacation, a roadmap is the essential tool that keeps you on the road to your final destination. The same holds true for your financial destination, or what I like to refer to as ‘financial independence’.

The risk that is necessary to get one individual to his or her destination may not be appropriate for someone else. In addition, some individuals have a greater interest in holding individual securities as opposed to mutual funds. Everyone starts at a different place and has different needs and risk tolerances.

Think of it another way. Let's say two people are interested in becoming physically fit. One of them is training for his or her first marathon and another hopes to become an accomplished tennis player.

The weekly regimen a physical trainer would prescribe might include some of the same exercises, say warm-ups and stretches, but the similarities may quickly end at that point.

The same holds true for retirees John, whose financial plan is primarily designed for income and the preservation of capital, as compared to Jane, who won’t be retiring for another 25 years. Unlike John, Jane may have a much larger concentration of stocks and more aggressive investments that simply aren’t the right fit for John.

Jane isn’t nearly as concerned about a steep sell-off and might even relish the opportunity to buy more shares in the event of a decline. However, John must take a much more cautious approach. Hence, what I might recommend for one person, I do not recommend for another.

Simply put, much like an exercise plan, recommendations vary based upon individual goals.

Eschewing the flavor of the month

By taking such an approach, we may choose to avoid stocks that are hot today, or tips you may have heard from acquaintances.

To visualize it yet another way, each investment sits in your portfolio for a reason, much like a piece in a puzzle. And a piece that fits into one puzzle may not be right for another puzzle.

Whatever your goals may be, the asset allocation we recommend is designed with your objectives in mind. Choosing investments outside the chosen strategy can lead you astray.

A review of the key themes

Let’s take a look at recent financial events. There have been a number of factors that have dulled interest in stocks over the last year.

I’ve touched on a number of these in recent posts and I won’t rehash. But I do want to touch on a couple of the broader themes that have had an influence on stocks in recent action.

Let’s start with the economy. Economic growth drives profit growth, and profit growth is the biggest factor that drives stock prices over the longer term.

On the one hand, fears of a recession that were present in January have receded, which have helped shares recover from a modest sell-off early in the year. But economic growth has been far from impressive.

A quick look at the latest data on Gross Domestic Product (GDP), which is the largest measure of goods and services in the economy, confirms this.

Preliminary data released late last month shows that first quarter GDP grew at an annual pace of 0.5%, down from a sluggish 1.4% rate in the final quarter of 2015.

Yes, we’ll get two more revisions when more complete information rolls in, but it is not reflective of an economy that is moving ahead in high gear.

But did the economy really slow as much as the preliminary report suggested? In reality, that’s up for debate.

In an interview at the beginning of the month on CNBC, Warren Buffett noted that business is “slow,” but pointed out, “There's one little thing that many people don’t understand about the GDP figures. Maybe I don’t understand it, but my understanding is that they’re sequential figures.

“You take the figures from one quarter to another and multiply by four. So, if you’re off by a tenth [of a percent] on the seasonal adjustment that becomes a four-tenths figure.” 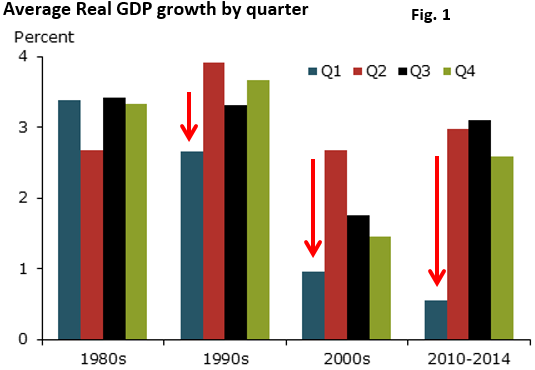 Unlike 2014, we can’t blame a harsh winter on Q1’s weak performance. But the longer-term data would suggest we may see a bounce in reported activity in the current quarter.

By year’s end, it all washes out, but seasonal distortions that aren’t accounted for in the current models may be overstating 2016’s lackluster start.

What does all of this mean? Slow economic growth lends some support to corporate profits, but it does not significantly boost earnings over the short term.

The ebb and flow of the dollar

A second drag on stocks over the last year has been the strength in the dollar. For companies doing business primarily at home, it doesn’t have much of an effect.

But for those larger multinationals that depend on a significant amount of sales from overseas, King Dollar has hurt at the margin.

While a U.S. citizen traveling abroad benefits from a strong dollar, a U.S. corporation must translate foreign sales back into more expensive dollars, which nibbles away at revenue. Think about a foreign tourist visiting the U.S.

Although headwinds from the dollar remain, they have receded of late.

Take a look at the table below. In no way is this a recommendation for any of the shares highlighted in the table, as they may or may not be appropriate for your unique situation.

But most are household names. And I am including the table strictly for educational and informational purposes only, illustrating that dollar headwinds have receded in Q1.

Percentage points the stronger dollar shaved from revenue in Q1 2016 vs. Q4 2015

Source: Investor Relations of each firm

As we entered May, the dollar had slipped to its lowest level in over a year against several major currencies (MarketWatch).

While the reason for the reversal has been debated, many point to a Fed that has been reluctant to follow through on an expected series of gradual rate hikes in 2016. Sure, the Fed says it is eyeing an increase or two later in the year, but the language in its statement following the April meeting suggests it is in no hurry to follow through.

Could we see tailwinds to S&P 500 revenue in Q2 if the dollar remains at today’s levels? It’s a distinct possibility.

A weakening dollar also provides support to foreign investments (denominated in dollars). As displayed below, we’ve seen a nice rebound in Emerging Markets YTD as compared to the 3-year average. Swift moves in the dollar (among other variables) are a healthy reminder that it’s nearly impossible to time the market. Being disciplined and staying the course in a diversified portfolio, although very challenging at times, is the best strategy over the long haul.

The Fed appears to be on the sidelines right now, so let’s take a quick peek at Europe. In June, Britain will vote yes/no on a referendum to remain in the European Union (E.U.). Coined “Brexit,” a vote against remaining in the 28-nation federation could create a new round of uncertainty in Europe.

The latest polls put those who want to remain in the E.U. in a slight lead (Reuters), which suggests this issue may get more coverage in the days and weeks ahead.

Markets hate heightened uncertainty, which could add to volatility in stocks.

I consistently counsel to look past short-term events that can create short-term waves, especially when they originate overseas.

Over the medium and long term, U.S. markets take their cues from what’s happening at home.

That leads to my final point.

Stick with the plan that has been purposely crafted for your unique situation. Markets will go through cycles that take us to new highs and markets will also enter periods of volatility. Making decisions in haste based on an emotional reaction to current circumstances is rarely profitable over the long term.